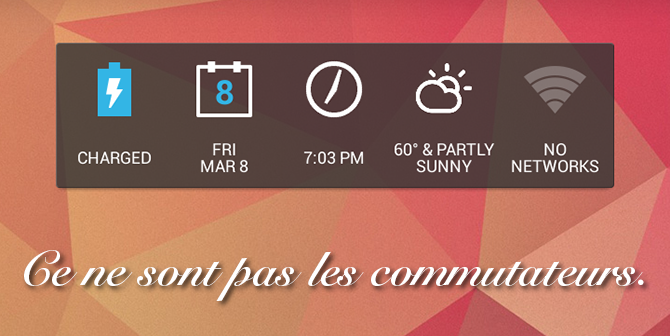 A lot has changed on Android in the last couple of years. When we first started HD Widgets, toggle switches were very common and we could all do a lot of things with them. Since then, many common toggles such as GPS, 3G, and even Flight Mode have been made inaccessible by updates to Android OS.

HD Widgets will soon have over 50 switches - except most of them aren't really "switches". At current count only 18 actually toggle something. The rest are simply status indicators & action triggers.

To keep up with the times we're going to change what we call these things. You'll soon see it in Colourform. Switches will be called Quick Settings to match Google's naming style for the notification switches introduced in Jellybean.