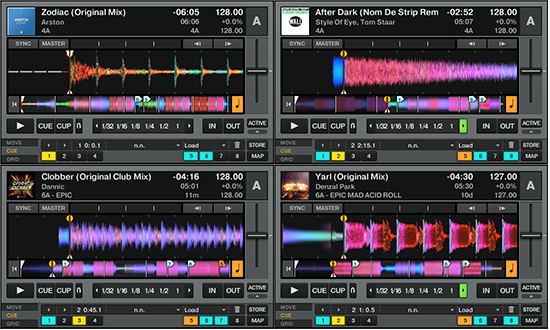 Last summer, I shared my method for using Traktor cue points. This time I'm going to show a real-world example of this method by going over the cue points I used in my recent mix, The Titan Festival. END_OF_DOCUMENT_TOKEN_TO_BE_REPLACED

Alberto
March 5, 2014 at 2:13 pm
Hi Marx,
really cool job! ;)
I have a question on traktor sotware: how you (or software) chose the color of the visual wave of the music?! and why sometime the color change a lot in a clip?!?
thanks a lot for share your project
A
Reply

radley
March 12, 2014 at 1:43 am
Preferences> DECK LAYOUT> MISCELLANEOUS> COLOR MODE> SPECTRUM
The colors reflect different EQ bands. Magenta is bass, red is kicks, while blue and green are higher frequencies – or so it seems. To be honest, I just like these colors best.
Reply

Nu
May 18, 2014 at 5:08 am
Hi Radley,
I love how you explained this in detail, I was looking for this all over the net. I have 2 questions for you:
1. You didnt really explain the volume limits when mixing in 2 tracks or how long you kept the master track going loud and how long you kept the incoming track low until you raised the volume to the max… Can you give me one example for any of those tracks? With volume level indications please….
2. Can you upload this mix so I can follow exactly how you did all those steps?
I just started off with DJing a couple of months ago and my mix blend is quiet impressive as told by many but my issue is in the volume and EQ while mixing in. I’m still having a bit of an issue fading out properly with some tracks (volume wise) and killing or adjusting the EQ well. Not all tracks but with some, you can sense there’s something coming and I dont want that to happen – I want it to sound so smooth it tricks you each time.
Thanks
Reply

radley
June 27, 2014 at 7:01 pm
Yeah, the S4 doesn’t have dip like the Pioneer or Rane mixers. I just do it manually. It really depends on how you’re playing. If live, you can get away with a lot more. When recording I try to keep as flat as possible and raise / lower volumes. My habit is play at 90% volume and drop to 75-80% for mixes. I don’t fiddle with EQ levels too much and only adjust lows when necessary.
My crossfades will often be too loud in the recording, but that’s what mix engineering is for. Remember the master quote:
There’s not a problem that I can’t fix
Because I can do it in the mix
By “mix” he meant mixdown, aka the post engineering of a song ;-)
Reply

pope
June 27, 2014 at 6:01 pm
Great stuff on documenting your workflow!
Been considering a switch to traktor for a while now, stumbled upon your blog while looking up details that would apply to my particular workflow. It seems your countdown method is pretty similar to what I’ve been doing, but I have a few questions after I drop my particular situation:
For the last 15-odd years, I’ve used Mixmeister to build a setlist and study transitions. This tool has allowed me to work out set flows and quickly experiment with tracks. All gigs used to be vinyl up until releases got pretty lean, I made the switch to the pioneer 2000’s for performance (about 5yrs ago.) My first year or so on that workflow drove me to write a script to translate a Mixmeister mix into a Rekordbox playlist and track cue points. In the Pioneer world, there are 10 cue points and 3 hot cues (A/B/C.) My script scans the Mixmeister set and pulls in the first cue point as cue-in, the fade in point as B (bass/vol up in a bass swap for example,) A as the fade out (play the next track) and C as the ‘cut’. Pretty similar to what you did, only your method is a bit more ‘portable’…
Now, here’s the situation: I mix a lot of breaks, d&b, and glitch-hop, and from set to set there’s likely a huge difference in the default cue points used for each track in a set than any other set (depends on the tracks and their order, really…) So, whatever cues were used in the last set prevail and the older sets cues get scrambled. To get around this issue with Pioneer’s solution, my script creates the playlist and copies files as hardlinks into a subdirectory. When imported into the Rekordbox library, it treats them as unique tracks and cues, so that set will always be that set no matter what happens in the future. It also means that Rekordbox is a ‘junk’ database, and that mixmeister is the master of the universe. Lastly, it also means that a thumb-drive of mixes will probably have a few copies of the same tracks taking up space (not at all a big deal in today’s world.)
Finally, the questions: What do you do when you have unique cue requirements in a particular mix? My guess is that Traktor’s database is probably very similar to Rekordbox, in that cues are unique to tracks and not to mixes, is this correct?. Since the cue information is optionally stored in the track’s metadata, do they provide a way to import that information from the tracks?
Best,
-P
Reply

What do you do when you have unique cue requirements in a particular mix?

Yes, cues are unique to tracks, not mixes. I’m not experienced with reading/writing Traktor track metadata, but very curious!
I use a Kontrol S4 which has cue points 1-4, so I can use any of those for a drop marker. If I just want drop points, I’ll use them in regular order or best-cue order. If they’re not listed 3, 2, 1 then I know they’re not really countdowns.
Reply